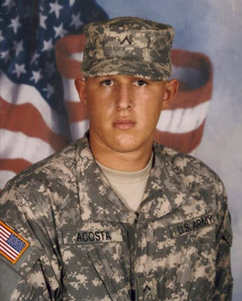 A Fort Bliss soldier and father of a 4-month-old girl died from wounds he received in an explosion that killed three fellow soldiers in December in Afghanistan, military officials said Thursday.
Spc. Edward J. Acosta, 21, who had been paralyzed by his wounds, died Monday at a hospital in La Jolla, Calif., the Department of Defense and military officials said.
"He was a fighter and gave his life on behalf of our nation," Maj. Gen. Dana J.H. Pittard, commanding general of Fort Bliss and the 1st Armored Division, said in a statement.Acosta was assigned to 2nd Battalion, 5th Infantry Regiment, 3rd Brigade Combat Team, 1st Armored Division.

Acosta, who was a combat medic, was riding in a vehicle struck by a bomb during a route-clearance mission on Dec. 3 in the Wardak province of Afghanistan, stated the Army's website.
The blast that day killed three other Fort Bliss soldiers -- Sgt. 1st Class Clark A. Corley Jr., Spc. Ryan M. Lumley and Spc. Thomas J. Mayberry. It was the single deadliest incident with the most casualties from Fort Bliss since several soldiers were killed in a single attack in 2007 during Operation Iraqi Freedom.
Acosta was from Hesperia, Calif. His grandmother, Betty McCarty, told the Ventura County Star newspaper that Acosta had an interest in the military since a young age and joined the Army right after high school.
In October, Acosta was deployed to Afghanistan. His wife, Lindsay, gave birth to their daughter, Emmalyn, while he was in Afghanistan.
After being wounded, Acosta was transferred to military hospitals in the United States.
A photo on the Army's website showed Acosta lying on a hospital bed when he was presented the Purple Heart medal by Gen. Robert W. Cone, commanding general of U.S. Army Training and Doctrine Command. Acosta was accompanied by his parents, wife and daughter during the ceremony on Jan. 6 at San Antonio Military Medical Center.

If you have anything to add to Edward's tribute please send to Webmaster@Bobcat.ws