Back in Infantry Officer Candidate School at Fort Benning, Georgia, we aspiring to a US Army Commission had to periodically rate all of our fellow students within our respective platoons.  Our Tactical Officers (TOs) required that we had to rate a number of our peers in the top 25% of our class and a corresponding number in the bottom 25%.  Any collusion to skew the spread was an honor violation subjecting the perpetrators to immediate expulsion from the course.  Because we all considered ourselves pretty much equally talented, we called the rating forms "Bayonet Sheets" and the rating period was dubbed "knife your buddy week".  The TOs helped a lot with rating the top 25%.  They told us to simply imagine ourselves in combat leading the center platoon.  To select the best of the best, they simply suggested, "Whom would you want the most to be the platoon leader on your left or right flank?"  I would always want someone like Frank D'Amico to be there.  Up until December of 1965, I had been a contented paratrooper in the 101st Airborne Division.

For eight months I had led the 1st Platoon of B Company, 3rd Battalion (Airborne) of the famed 187th Infantry Regiment ("The Rakkasans").  It was the "best" rifle platoon out of the 81 such platoons in the 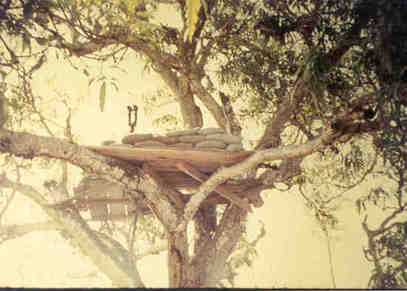 sniper scope but we did have a binocular telescope that we "borrowed" from the 1/8th Artillery.  As you can see in Figure #3, the gunner sat behind the weapon while an observer (not pictured) looked through the telescope on the tri-pod on the far right of the picture.  The soldier with me is Lt Frank Trenery, XO of B Company.   It's hard to believe but even with a muzzle velocity of 3,200 feet per second a .50 Cal bullet (1/2 " diameter) can be seen in flight.  All you have to do is look for the apex of the visible shock wave on either side of the bullet and there it is.  The gunner is told where the strike was and is given an estimation of what changes he should make with the T&E mechanism.  Using this method, we could accurately shoot over the trees along the river all the way into the Fil Hol Rubber Plantation 1,500 meters away.  On our very first trial, we selected a VC bunker on the edge of the plantation as a target.  The bunker had only a 3" high aperture.  After only a couple of spotting rounds, a gunner, using single shot, could put round after round through that tiny opening.  I put three consecutive ones in there myself and didn't want to waste any more ammunition.  Frank D'Amico came by a short time after the project was finished and gave the system a try.  He was impressed.  So, were the VC.  No more sniper fire.  And I gave all the credit to Frank D'Amico.  The whole contraption lasted until 30 April 1966, when we permanently turned over our perimeter duties to a platoon from the 1st Brigade.  I had to take .50 Cal with us, but advised the new platoon leader that he should get his own up there ASAP.  The VC moved in that very night and destroyed the platform with rocket propelled grenades.

Frank came to visit me in my platoon area a few more times in February and March when we were on the perimeter, whichwas not too often considering that the 1/5th Inf (Mech) was out   in the woods most of the time on many operations.  Whenever Frank did visit, he confided 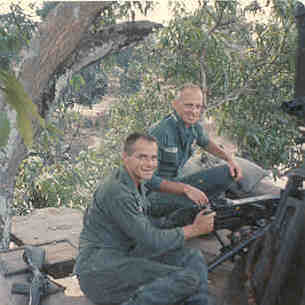 to me how bored he was at Brigade HQ and how anxious he was to join us in the "Mech".    Frank finally joined Company B, 1st Bn (M), 5th Inf on Easter Sunday, 10 April 1966.  After Easter Mass, celebrated by Cpt (Fr) Clarence Olszewski, the only Catholic Chaplain in 2nd Brigade, we all went back to the company area where Frank was welcomed as the new 3rd Platoon Leader by the B Company officers and men.
The following is a picture taken by Frank that same day.  It depicts most of the Co B Officers minus Cpt Vickery, The CO. From left to right standing are:  2/Lt Chuck Burgardt, the attached 1/8 Artillery FO, 2/Lt Bob Whaley, 1st Platoon Leader, 1/Lt Frank Trenery, Co B XO.   Kneeling from left to right:  1/Lt Lo Phillips, Weapons Platoon Leader and myself, the 2nd Platoon Leader.

What I'm sketching on the ground in the above picture is an elaborate "bull shit" diagram of how I maneuvered my platoon during the 35 minute trench fight in the the Fil Hol Plantation the day before, Holy Saturday, 9 April 1966. I was especially happy to have Frank on board 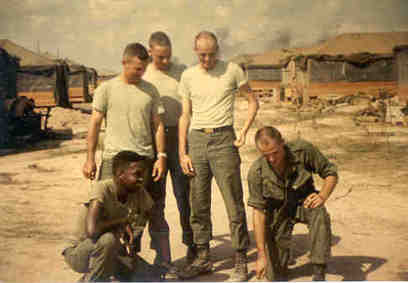 We moved to that objective in the combat formation described above.  I was amazed at how well and almost effortlessly Frank managed the echelon right formation of 3rd Platoon, not only in open rice paddies where it is easier to maintain but alsothrough rubber plantation and 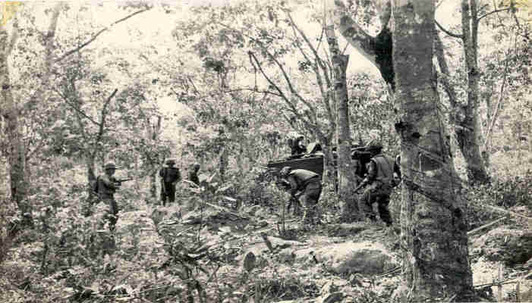 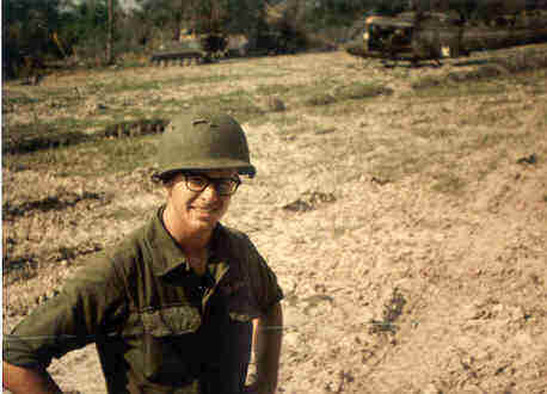 My RTO, Ken Smith, almost became a casualty of VC sniper on 13 April.
Note the bullet hole through his helmet.  Thisphoto was taken on 14 April 1966. 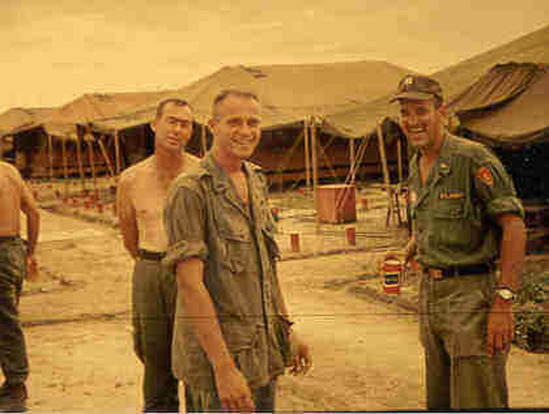 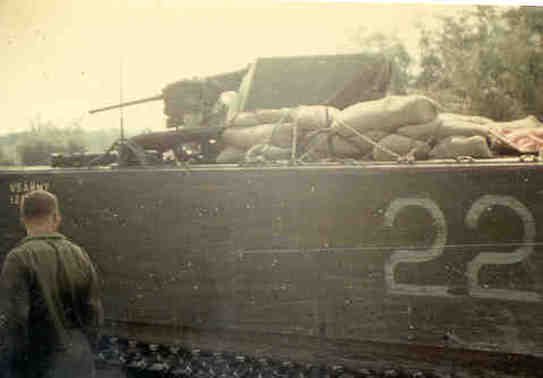 Port view of my command track, Blue 22.  Note the many bullet
and fragment holes from the recovery effort of the stuck tank.
Also note that the aft most antenna of my  two antennae had
been shot off near the base.

Two days later, after we returned to Cu Chi Base Camp, Fr. Olszewski found me weeping in a totally blacked out supply tent.  I had never cried since I had been a baby and I didn't want anybody to see me doing it at 27 years old..  It's at the base camp that emotional things really hit you and hard.  Trying to understand God's Providence is tough when you've lost so many good friends.  Father explained to me (guess I had forgotten) that God knows all that happens and looks out for everyone of us.  Nevertheless, it is the "Permissive Will" of God that lets bad things happen to good people.  God, although He could, seldom directly interferes into the "affairs of men".  He foresees that bullet flying through the air and could stop, but if He started doing that for some and not for others, where would it end?  Would men even have "free will" any more, the gift that separates us from the lesser animals?  To expect God to interfere, to stop that bullet, etc. is the sin of "Presumption".  In essence we are telling God, "OK, You do my will, not Yours!"  That's not the way it works and for the good reasons stated.
In closing I just want to say this to the relatives and civilian friends of Frank D'Amico.  Whatever opinions you may have of the Vietnam War in general, Frank and I were of the same mind in this matter.  If  we weren't fighting Communist attempts at world domination in one place, it would have been in another.  That was the nature of the Cold War.  It was a morally good endeavor inspired by our love for freedom and our fellow man, especially those less fortunate or able to defend themselves.  I think that if Frank were here today, he would agree with me that if freedom ended at our shores and we were the lastdemocracy in the world, we would not keep it for long with a totalitarian world arrayed against it.  Frank ran the good race, he fought the good fight,  and now in Heaven he has won the prize, eternal peace and life.
Finally, I have to add that in the old days you never heard soldiers telling each other, "I love you man!"  We just didn't talk that way.  We veterans do that now but this is now and then was then.  But we did love one another in ways that even family find hard to understand.  And we miss him too.  I missed him for months in the later battles.  Many fine Platoon Leaders served with me at my flanks before I left Company B for a cushy job at 1/5 (M) Inf Bn HQ Co.  Frank will remain always in my memory as one of the finest of all those Platoon Leaders.  And I still miss him.  He was my family as I was his.   Frank epitomized what love is all about for as Jesus said:  "Greater love hath no man than this, that he lay down his life for his friends."  Frank did just that for me and you, all of us, and I'm proud to have known him and served with him. 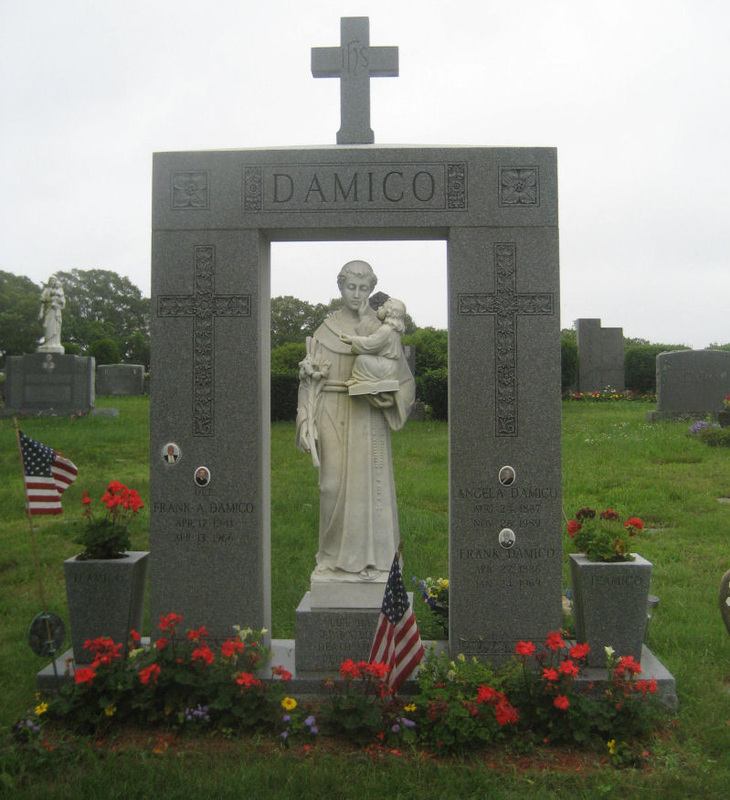 If you have anything to add to Frank's tribute please email it to webmaster@bobcat.ws