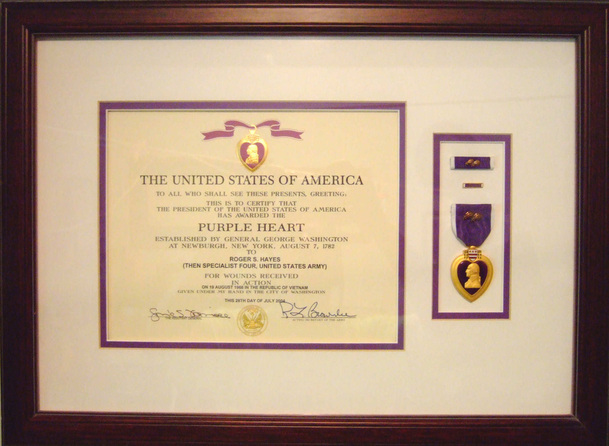 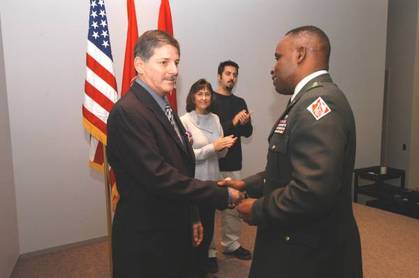 Some forms of recognition are late in coming, but many are still appreciated by their recipients. Roger Hayes recently received a military medal that he earned in 1968 but did not receive. He was wounded in August 1968 while serving with the 1/5 (Mech) Infantry, 25th Infantry Division in Vietnam. But the paperwork for a Purple Heart award was either misplaced or never submitted.

Hayes, who was wounded four times in Vietnam, received two Purple Hearts, but has never regretted that his DD Form 214 does not reflect more. "Those things happened," Hayes explained. "Our medics were very busy during and after battles, and it’s understandable how those things fall through the cracks."

In the autumn of 2003, a remedy for one of Hayes’s wounds was put in motion. Major Joe Tyron, then Deputy Commander of the St. Louis Engineer District where Hayes was employed, now serving in Afghanistan, read Hayes’s book, On Point, (Presidio Press, 2000). Upon learning that Hayes was wounded on four occasions but received only two Purple Hearts, he resolved to correct the oversight.

"Although Major Tyron was very busy, he never forgot the issue, and kept it high on his priority list, Hayes reported. "In addition to submitting necessary documentation, he followed up with numerous phone calls and email messages."

Although one of Hayes’s wounds did not receive medical attention, and therefore doesn’t meet eligibility criteria, a Purple Heart medal for a wound inflicted on August 19, 1968 was approved by the Army Human Resources Command. It was presented during a ceremony held November 10, 2004 at the Corps’s district headquarters in St. Louis. Brigadier General Robert Crear, Commander of the Mississippi Valley Division, U.S. Army Corps of Engineers, made the presentation at a "town hall" meeting of Corps employees while Roger’s wife Lonnie and his son Chad looked on.

The wound that led to the recent purple heart occurred during a battle against an North Vietnamese Army regiment near the forward base camp at Dau Tieng. A round from either an AK-47 or a machine gun that fires the same ammunition struck the turret on the top of Hayes’s squad’s APC, splitting in two. The brass casing struck and entered Hayes’s upper right arm, penetrating to the bone. Although recuperation took a month, he recovered fully.

"It was quite a ceremony for an act during which someone forgot to duck," quipped Hayes. "But seriously, it really touches me that Major Tyron would see the 1968 oversight as an injustice, and work tirelessly to see that it was corrected. For that he has my lifelong admiration and respect. And the Corps of Engineers demonstrated that although one retires, he is still part of the Corps family."