HILLS OF SACRIFICE
The 5th R.C.T. in KOREA 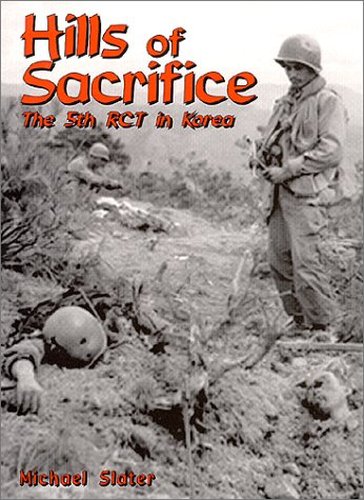 This is a moving account of a premier Army unit during one of the Nation's most costly, yet least remembered wars. Battle action is seen through the eyes of the men who endured those horrors.
The 5th Regimental Combat Team was unique in many respects. Not only was it the last U.S. occupation force to depart peaceful Korea in 1949, it was among the earliest elements to return to that war torn country within the year. Moreover, the Hawaiian regiment was proud of its unusually diverse cultural and ethnic blend. As a separate RCT, the 5th was assigned, over the course of the war, to the majority of Divisions in the US Eighth Army. It fought with the 1st Calvary, 1st Provisional Marine Brigade, 3rd, 24th, 25th, 40th, and 45th Infantry Divisions. Woven into this saga is the fateful journey of a young soldier from Hawaii and the agony of the family who lost a son defending the liberty of a people he knew not.
The 5th RCT stands in the annals of military history among America's most storied regiments such as the 442nd Go For Broke, 27th Wolfhounds and the 5th Marines.
Illustrated with hundreds of photographs, many of them by the acclaimed combat photographer, Al Chang. Also includes a comprehensive list of unit casualties and an index.
Foreword written by LTGEN Alpha Bowser, G-3, 1st Marine Division, Korea 1950-1951.