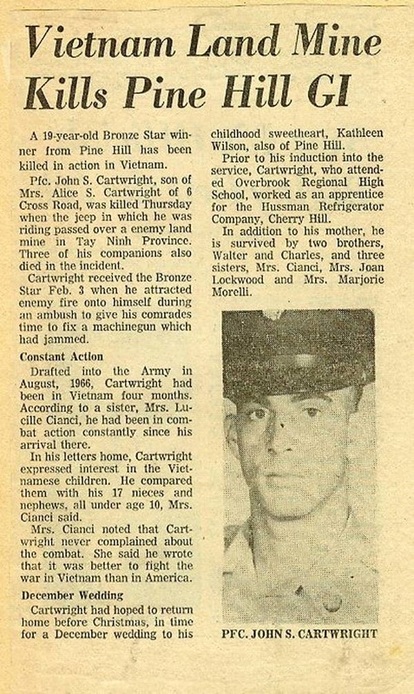 CLICK ARTICLE TO ENLARGE
John Stanborough Cartwright was born June 19, 1947 in Pine Hill, New Jersey.  He was the youngest of six children and was raised by his mother.  They were very close.  His mother was devastated the day he left for the Army.
John had a love for cars, motorcycles, racing cars and working on all kinds of cars.  He shared this love with his older brothers, which created a great bond between them.  He had a girlfriend for many years that he would have married had he not died in Vietnam.  A fellow soldier recalled that PFC Cartwright’s girlfriend sent him the record “I Am the Happiest Girl in the Whole USA” by Donna Fargo.
PFC Cartwright was a member of the 1st Battalion (Mechanized) 5th Infantry, 25th Infantry Division, “Bobcats”.  He was a track driver, also known as an Armored Personnel Carrier (APC).  He was killed when his track ran over a land mine in the Ho Bo Woods in the Tay Ninh Province on May 4, 1967.  PFC Cartwright began his tour only four months earlier on January 13, 1967.  He was 19 years old.  PFC Cartwright was buried on May 15, 1967 in the Beverly National Cemetery in Beverly, New Jersey, Burlington County.
PFC Cartwright was honored after his death.  The Rotary Club of Pine Hill gave him a citizen’s award. He was awarded two Bronze Stars: one for valor and heroism the other for meritorious service and for his efforts and professional ability.  He was given a Purple Heart for his mortal wounds.  At the Vietnam Veterans Memorial Wall in Washington, DC, John’s name is on panel 19E, row 035. References

If you have anything to add to John's tribute please email it to webmaster@bobcat.ws