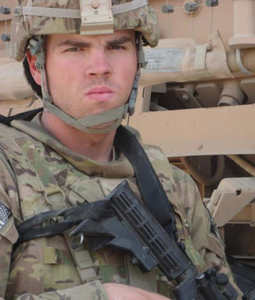 Recently killed Army soldier Pfc. LeRoy DeRonde III grew up in a "tight knit family" and enlisted in the Army to support his struggling family, his cousin Jason Owen said today.
The Department of Defense announced that DeRonde was one of two soldiers that was killed in Afghanistan when his unit was attacked by enemy fire during patrol on May 27.
The 22 year-old DeRonde grew up in Jersey City and was the middle child of three, leaving behind his younger brother Harold ,18, and older sister Jennifer, 33.
In 2002, the passing of DeRonde's mother from ovarian cancer shook the family to its core.
"At that time the family was going through rough times," Owen said. When Owen was 27, he and his fiancee became the guardians of DeRonde and his younger brother after DeRonde's mother's death. DeRonde was 16 at the time. DeRonde briefly attended Dickinson and Lincoln High Schools, Owen said today.
"At 20, it clicked for him. He would have to put the family on his shoulders to survive," said Owen, adding that DeRonde began to seriously consider the military. After getting his GED and taking a few college credit courses, DeRonde left home for basic training in January 2011. Three months later he was one of five basic training graduates to be promoted to second-class private and was awarded the 1st Battalion 48th Infantry Regiment Order of the Dragon Soldiers. DeRonde was stationed in Fort Bliss, Texas, and was assigned to the 125th Brigade Support Battalion, 5th Infantry Regiment, 3rd Brigade Combat Team, 1st Armored Division. Owen said his cousin was reserved, and had a heart of gold.
"I think his legacy will be that when he realized that his purpose in life was to help his family, he stepped up to the challenge," Owen said.
On Monday, Soldiers' Angels New Jersey -- a nonprofit dedicated to helping soldiers and their families -- paid tribute to DeRonde on their New Jersey Facebook page.
The viewing for Army Pfc. LeRoy DeRonde III has been scheduled for Thursday and Friday, 5 to 9 p.m. at the McLaughlin Funeral Home, 625 Pavonia Ave. off of Kennedy Boulevard in Jersey City.The burial will take place 11 a.m. Saturday at the Holy Cross Cemetery in North Arlington, the funeral home announced.
DeRonde will be buried at the cemetery's 9/11 Veterans Memorial section with a full military service.

If you have anything to add to Leroy's tribute please send to Webmaster@Bobcat.ws