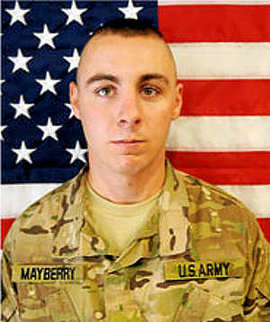 Thomas J. Mayberry, 21, of Springville, Calif., was an infantryman who entered the Army from Oakland, Calif., January 2009. His previous assignments include Fort Benning, and Camp Casey, South Korea. Mayberry’s awards and decorations include the National Defense Service Medal, Korea Defense Service Medal, Afghanistan Campaign Medal with a Campaign Star, Global War on Terrorism Service Medal and the Army Service Ribbon. Mayberry was posthumously promoted to the rank of specialist. He is survived by his spouse.

If you have anything to add to Thomas' tribute please send to Webmaster@Bobcat.ws