This is the story of the Fifth Infantry Soldier Chorus founded by
Luther Onerheim while serving with the Third Army,
71st Infantry Division 5th Infantry Regiment, during World War II. 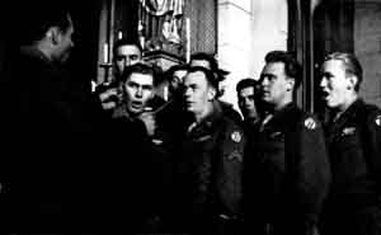 MEMBERS OF THE CHORUS REHEARSING IN AUGSBURG CATHEDRAL
Fort Benning, Georgia for the fight still ahead. The idea of a Regimental Chorus in this uncertain environment was controversial at best. But visionaries Chaplain Thomas O. Harrison and Chaplain Leon R. Gorsline believed and supported the dream of a top notch a cappella chorus made up of ordinary infantry soldiers. Undaunted by scoffers and general opposition, Pfc. Luther Onerheim held the first rehearsal on September 1, 1944 in the Sand Hill Chapel No. 5, Fort Benning Georgia. However, men were unable to attend rehearsals and the initial progress was very slow. A plea was made to Colonel Sidney C. Wooten, commander of the Fifth Infantry Regiment. He consented to give the chorus a chance and had a meeting with all First Sergeants . Attendance at rehearsals was no longer a problem! From these shaky beginnings, an outstanding musical ensemble was formed which would delight the audiences of Europe, as well as military dignitaries, including General George S. Patton who praised them saying "Fine music and excellent soldierly appearance".

Audio files of the chorus

The story and pictures are taken from The Soldier Chorus, an unpublished history of the chorus written and supervised by chorus member Robert Peck.
All files and material courtesy of Allin Sorenson,
Please email comments or suggestions to Allin Sorenson.