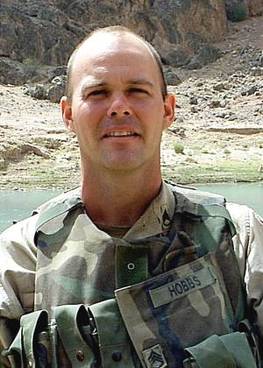 Two Schofield Barracks soldiers were killed in Afghanistan Thursday (14 October) when their Humvee struck a mine, a Honolulu relative of one of the soldiers said yesterday. The Army yesterday said Spc. Kyle K. Fernandez, 26, of Pearl City, and Staff Sgt. Brian S. Hobbs, 31, of Mesa, Ariz., were killed in the town of Miam Do. Fernandez's sister-in-law, Kristi Florita-Gouveia, said the family was told that five soldiers were in the Humvee on a routine patrol when it hit a mine.  The attack happened Thursday in Uruzgan province, northwest of Deh Rawood, where a U.S. military base is located. Maj. Mark McCann, a U.S. military spokesman in Kabul, said in a brief statement that an improvised explosive device - a homemade bomb - was to blame.

Uruzgan Gov. Jan Mohammed Khan reported the attack yesterday. He said that a remote-controlled mine detonated under an American Humvee on patrol in the Kishi area of the province's Charcheno district on Thursday afternoon. In response, a U.S. helicopter opened fire on the suspected attacker as he fled on a motorbike, killing him, the governor said. McCann did not comment on the reported firing by the helicopter.

The news struck a grievous blow to the families of Fernandez and Hobbs, both married with children.

Hobbs had served in the U.S. Army for 13 years. "He was one of the lucky ones, devoted to his job as well as his faith," said his aunt, Shirley Hobbs, in Arizona. Hobbs married his high school sweetheart, Jennifer, soon after basic training. They later had a girl, followed by two boys. He last saw them, now ages 11, 9 and 3, just two weeks ago, while on leave from Afghanistan, said his uncle, Steven Hobbs. "He was a loving father, a devoted husband," Steven Hobbs said. Survivors also include his father, Larry, and mother, Linda.

Hobbs, an infantryman who entered the Army in September 1994, was assigned to Headquarters and Headquarters Company, 2nd Battalion, 5th Infantry Regiment. Fernandez was an infantryman who enlisted in March 2001. He was assigned to Company C, 2nd Battalion, 5th Infantry Regiment. His sister-in-law said he loved bodyboarding and all the simple pleasures of life in Hawaii. "Yesterday in the mail, my sister received a letter from him. His mother, too," she said. "He was real upbeat. "They gave him a Bronze (Star) and a Purple Heart," Florita-Gouveia said softly.

If you have anything to add to Brian's tribute please send to Webmaster@Bobcat.ws