Roger Hayes recently had a book about his tour with the 1/5 (Mech) published by Presidio Press.  It's On Point: A Rifleman's Year in the Boonies: Vietnam 1967-1968.  He served with Charlie Company and arrived in-country on October 15, 1967. 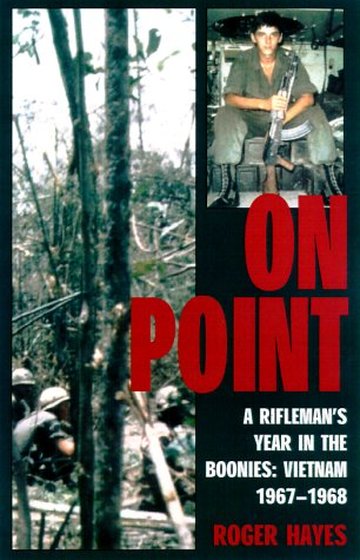 In October 1967, young Roger Hayes arrived in Vietnam for a 12-month tour as a rifleman with the U.S. Army's 25th Division. The tour coincided with the most violent year of the Vietnam War for American forces. Now, some 30 years after returning to the United States, Hayes has produced a literate and thoughtful journal of his time in beautiful, embattled Vietnam. Unlike many battlefield memoirs that focus on hardship and hardware, this is a work that addresses the culture of war, and of this war in particular, through the eyes of an intelligent innocent. The battles are certainly here, but their accounts contain fresh insights into even the most familiar aspects of war. As depicted by Hayes, American soldiers attempting to retrieve the bodies of their fallen comrades are unnerved because the spirit of the enemy lingers over the battlefield even after the fighting has been over for a day. Elsewhere, we learn that the Vietcong were rumored to have dismembered G.I. corpses in order to prevent them from being reincarnated into able-bodied men who could then become soldiers. Just as intriguing, though, are episodes recounting the daily lives of American troops in Vietnam, such as the horrifying and painful "immersion foot," whereby the sole of a soldier's foot became incorporated into the fabric of his socks or his boot sole. Packed with details and curious observations, this could easily wind up on university reading lists for courses examining the culture of war.
Photos."
From BookList:
"The year Hayes, a typical draftee, spent in Vietnam saw the bloodiest fighting of the war, including the Tet offensive. He served with mechanized infantry (i.e., mounted in M-113 armored personnel carriers) in the 25th Infantry Division ("Tropic LIghtning" aka "The Electric Strawberry"), which was heavily committed at Cu Chi and in the defense of Saigon. He saw his share of fighting, wounds, hardship, and successful R&R, eventually becoming, through a combination of competence and attrition, the second-ranking NCO in his company. He comes across as neither rebel nor victim--a survivor certainly worth several green lieutenants or "shake and bake" NCOs. He is a solid, sometimes vivid writer who provides, from the user's and sometimes the target's perspectives, valuable information on many of the weapons used in Vietnam, and shows consistent respect for the Vietnamese. He has made a good postwar life for himself. Vietnam memoirs are still multiplying like rabbits, but don't miss this one. It is way above average."