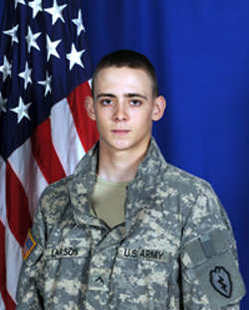 PFC. Ryan Jeffrey Larson, 19 FRIENDSHIP, Wis. - Pfc. Ryan Jeffrey Larson, 19, of Friendship was killed in action while serving in the U.S. Army on Wednesday, June 15, 2011, exactly one year to the day he left Adams-Friendship for basic training. Ryan was born Oct. 29, 1991, in Rockford, Ill., to RaeAnn Larson and Richard Himmel. He moved to Adams-Friendship in 1992. He attended Castle Rock Elementary School. He was an active, lively, interested student. Ryan was involved in youth football, Green Demon wrestling and Little League baseball. In middle school, he was active in wrestling, baseball, student council and played trumpet in the band.
He was the first boy to do flag corps for Cadet Band. He had the inner strength to do what others couldn't. He was confirmed in eighth grade as a member of the United in Christ Lutheran Church in Dellwood. In high school, he continued to play in the band, bowled on the Mauston bowling team, wrestled, ran cross country and track, was a member of the freshmen baseball team, and played some Adams-Friendship golf. He was a student council school board representative and was voted class president his senior year, all while staying on the honor roll all four years. He always had a passion to serve his country. He decided the Army was the best fit for him. He enlisted his junior year and left for basic training 10 days after graduating from high school. His belief was to protect the people he loved. He was eager to deploy to Afghanistan and so excited to be able serve his country. Ryan always had a twinkle in his eye and smile on his face, which made him a friend to all. He had a caring heart and a good ear for anyone in need. He was well-known for being an avid Bears fan. He will be greatly missed by many family members and his friends. Survivors include mother, RaeAnn Larson of Friendship; father, Rick Himmel of Rockford; grandparents, Ron and Ellen Larson; grandmother, Sophia Himmel; great-grandmother, Myrtle Pavlak; uncles and aunts, Ronald and Shelley Larson, Russell Larson, Ritchie Larson, Jim and Wendy Himmel and Cindi (Marty Cielesz) Himmel; cousins, Rebecca Larson, Ashley Witters, Maggie and Mick Cielesz; and other relatives and his many friends. Ryan was preceded in death by his grandfather, Col. Roger Himmel; and Sweetness. Service at 2 p.m. Saturday, June 25, in Adams-Friendship High School, Adams, with visitation from 11 a.m. to service time. The Rev. T. Christian Nelson will officiate.

If you have anything to add to Ryan's tribute please send to Webmaster@Bobcat.ws