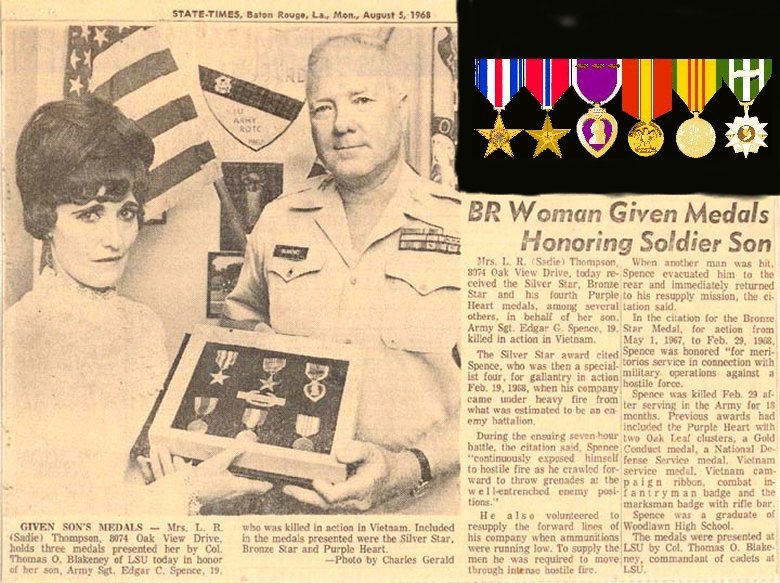 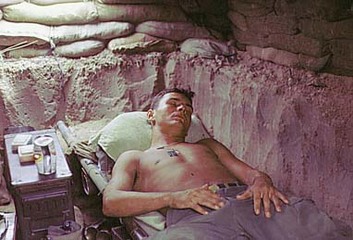 Spence and I checked into the 1/5 Mech on the same day, around the first week or so in May of 1967.  We both were assigned to the Recon platoon in Headquarters Company.  That was the beginning of a very special friendship.  Spence was a person that was full of life.  Always the comedian his antics kept me laughing until I'd cry. He was truly funny, sometime without trying.  He had the knack of making light of a serious situation in a way that it melted the tension away.  I still have to smile when I remember him.

As I recall Spence was hard to get close to at first.  Spence or Spencer, that's what everyone called him.  He called himself a "coon-ass" because he was from Louisiana, but it was Spence to us.  It took a while but we became good friends. Our friendship grew, probably due to our getting assigned to the same tracks, going on the same ambushes, and pulling the same duty.  He was one of those people you truly liked to be around because there would never be a dull moment.  I remember the little sparkle in his eye and a slight grin just before he'd do or say something funny.  It was kind of like they were saying "lookout here it comes."  He usually made himself the butt of the joke and he made a good straight man too.

Spence was wounded three times.  The first time he was on an ambush where he was walking point and they walked into a claymore.  Our new platoon sergeant took the brunt of the blast and was KIA. Spence was out recuperating for some time but returned to Recon.  The second time Spence was wounded by the malfunction of a 50 caliber machine gun.  That wound sent him to Japan for quite a while to recover and rehabilitate his leg.  To our supprise he returned to the field when he came back from Japan.  His return had an immediate uplifting within the Recon platoon.  That was just the affect he had on people.

It was just a few weeks after he returned that he was killed.   Spence was KIA on  29 Feb, 1968.  Odd that was also leap year day.  I was not with him the day he was killed. We stepped into one heck of a fight early that day.  I was called away to assist A company, who had one man KIA in the initial contact and one man penned down by fire.They needed an M79 and I was elected.  It was strange to not be with Recon and Spence during the battle.  As the story was told to me, Recon was attacking the dug-in NVA position on their flank.  At one point an element of Recon got shout up pretty bad.  Spence was laying down suppressive fire while others rescued a wounded Recon toop.  That was when Spence was KIA.  I understand there was a Bronze Star awarded him, but I do not know this as fact.

The last time I remember seeing him was just before the firefight broke out.  The LT. put us on line as we approached a hedge row.  Spence ended up in waist deep water sludging through the mud complaining in a way that had those around him in stitches.  He just had a way about him.  That's the way he should be remembered.

I still miss him.  As we all miss those that we have lost.  Spence was a special friend to me.  I've visited him at "The Wall" three times now.  I have his picture in my din next to my Army stuff.  I will always wonder why someone so full of life had to go so young.

Howard Craig
I was with Sgt Spence when he was KIA , he was directing & returning fire when he was hit. As I remember Sgt Spence , he was a no nonsense type a person. He was a good leader .

If you have anything to add to Edgar's tribute please email it to webmaster@bobcat.ws