Leo Hinterlong is shown on the far right (just behind my left shoulder). 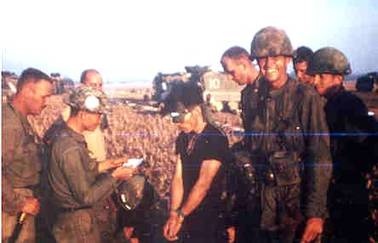 This shot was taken on 17 March 1966 near Hiep Hoa Village, Duc Hoa District, Hau Nghia Province near the end of Operation "Honolulu".  Sp/4 Hinterlong participated in the capture of the VC shown.  The VC was in a tunnel located in a hamlet near Hiep Hoa.  He was driven out by a combination of smoke and riot agent.  I'm laughing because when he ran out of the tunnel entrance, he was completely terrorized and kept yelling, "Finis, Viet Cong!  Finis, Viet Cong!"  When we asked him where his weapon was, he said, "I lost it."  In the picture, an RVN National Policeman is asking him many of the same questions the 2nd Platoon asked immediately after his capture.  Now, after he decided that we weren't going to kill him, he is telling the policeman, "What weapon?  I'm just a simple farmer." Sp/4 Hinterlong died in the explosion of track 23 in the Fil Hol Plantation on 21 July 1966.
Ted Jagosz

If 20th Century Fox and Paramount were to be believed, the American fighting man charges imperturbably from foxhole to foxhole and from triumph to triumph.
Naturally, when the enemy throws a grenade at him, he flips his M-16 rifle around and belts it harmlessly away, much as Willie Mays might line a double into the left field corner.
War, however, is not always filled with the action Hollywood would like to portray.  Much of it is silent, agonized waiting.
I spent 24 hours in a bunker with members of Co. B, 1/5th (Mech.)- whose duty is to guard a strategic outpost half a mile outside the Cu Chi perimeter.
I moved into a bunker with two riflemen of the 2d platoon’s third squad.  It was their turn to spend 48 hours in the rubber tree surroundings before going back to the foxholes on the perimeter.
It was dusty, cramped and humid.  There were ants crawling on the floor and very shortly on me.  On the ground were chewing gum and candy bar wrappers and shells from expended M-14 rounds.
Specialist Four Nathaniel (Nat) McLean, a native of Zebulon, N.C, a speck of a town about 20 miles from Raleigh, and Pfc Leo Hinterlong, a 22-year-old from Cincinnati, sat quietly listening to a transistor radio to Nancy Sinatra’s “These Boots Were Made for Walking” on Armed Forces Radio.
Thoughts of home invade the quiet hours.  Leo was thousands of miles away.  His fatigues were very dirty; it doesn’t take long in a grimy foxhole.  In the left pocket of his fatigue shirt was a letter from his best friend’s girl.
“I guess she just wanted to write,” he said.  He took out the letter and read it.  “I read it before, but I like reading it over again.”
He said he had a girl back home.  I asked if she wrote much, and he said;  “Yes.  Well, not that much.  She wrote one time and told me she had found another boy friend.”
Nat was interested in the all-important mail, too.  He said if he missed getting mail a day or two he really got down in the dumps.
“I sure hope they have some mail for me tonight,” he said.  “I’m expecting some pictures from home.  My wife has been keeping me up on my favorite TV shows.”
They didn’t talk too much.  Most of the time, their eyes were gazing at the flat area in front of the bunker.  Thirty yards from the bunker was a string of concertina wire.  Thirty yards from there was the fringe of the rubber plantation, and beyond that.... ?
“How long were we here before we saw our first action?”  Nat asked  “Two hours.  A guy went down to the river and the V.C. opened up  He couldn’t get out.”
The sun started to dip into the rice paddies in the west, and Sergeant Boyd, the squad leader, stuck his head into the bunker, and said, “I want you boys to keep alert.”
Leo turned off his radio.  “I’m glad I bought this thing,” he said.  “It’s not too bad in here with this.  It keeps us up with the world.”
“It can get real lonely here,” Nat said.  “You have so much time to think.  You think about things you haven’t thought about in 10 years.  I thought about some girl I used to go with in grade school.  She’s probably married now and has a flock of kids.”
There would be no moon that night and Nat worried about this.  It is hard enough to find the Viet Cong in the light.
“I’ve never seen anybody shoot at me yet,” Leo said,  “but I’ve had those bullets really hugging my head.  The closest I’ve seen the enemy is when they capture one.”
As darkness descended, they talked, when necessary, in whispers.  Leo was behind his M-14 automatic rifle, staring quietly to the front, while Nat rested his head on his steel helmet and tried to get some sleep.
Sleep is a precious commodity in a bunker.  There is no room to stretch the body and the mosquitoes buzz tormentingly around the ears.  It is deadly humid.  And there is fear.
Co. C had ambush patrols in front of us.  If they had to return quickly in an emergency, they were to yell code words, allowing them to pass our field of fire safely.
Leo got sleepy and Nat took over.  He saw a figure walking in front of the bunker.
“Halt!” he snapped.  “Who is there ?”
“Wherling,” the voice said.
“What’re you doing out there?” Nat said.
“Some of our sandbags fell in,” and he was looking for the command post to report the matter.
“All right,” Nat growled.  “Go behind the bunker.”
And then it was silent again.  Occasionally, the silence was broken with small arms fire from another area of the perimeter or the blasts from artillery hitting distant Cong positions.
Leo went back on duty and then it was Nat again.  All of a sudden it was bright.  Trip flares blazed in red about 50 yards from the bunker.  Nat had his finger ready on the M-79 grenade launcher.  He whispered to me, “There’s somebody out there.”
If there was, Nat couldn’t spot him, and soon the light died without a shot being fired.
“Wake up,” Nat said to Leo.  “It’s morning.”
The first rays of the sun yawned over the trees.
“Well, we made it through another night, Leo,” Nat remarked.
Too bad all nights aren’t as quiet.

Courtesy of the Tropic Lighting news

If you have anything to add to Leo's tribute please email it to webmaster@bobcat.ws